Last year I was given three ipods & Belkin recorders as part of an ipod grant through the school district. This year, instead of a traditional exam for the WWI unit, I had students prepare for an oral exam. They were allowed to prepare the night before and come in with one index card of notes for their exam. Within one class period (46 minutes), using three ipods, I was able to have every student (30 in the largest class) record their responses.

Students were given a maximum of 5 minutes, and their responses were based on accuracy and presentation. (Most presentations lasted about 3 minutes)
Once recorded, the student would return (from the hallway or stairwell) and I would give the ipod to the next student.
Once all responses were recorded (4 classes, 98 students) I synced the ipods to itunes.
1. Have students start their recording with their name - rename the response in itunes as you listen.
2. Make playlists named for each class period, then drag and drop files into each class to stay organized. The screenshot below shows the class playlists off to the left & the renamed files. 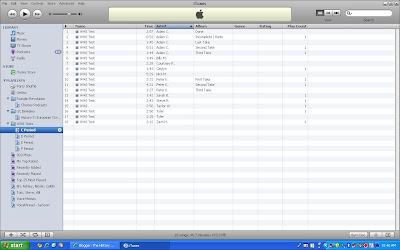 Even without 3 classroom ipods, you could use your own ipod and give students the option of taken an oral or written exam.
Try it out, and email me with your results or questions. (gkulowiec@gmail.com)
Posted by Greg Kulowiec
Email ThisBlogThis!Share to TwitterShare to FacebookShare to Pinterest