As part of my 9th grade unit on European Exploration and my continued effort to not use the textbook until 2011 (that effort will undoubtedly continue through the new year), I decided to use part two of Jared Diamond's Guns, Germs and Steel video to end the unit. My goal / objective was to have the students examine European exploration from a new perspective, one that isn't mentioned in the textbook, one that would force them to reconsider what they have typically assumed about this concept.

After watching the film (we spent two days, covering roughly 25 minutes of content during a 50 minute period) and reviewing our notes, the students were given the opportunity to debate and demonstrate their understanding of Diamond's theory. Ultimately, my goal was to have the students consider the significance, relationship and importance of the many advantages the Europeans had over the native peoples of the new world.

As I have mentioned in previous posts, I used Triptico's "Word Magnets Tool" to have students visually plot their perspective on Diamond's ideas.  While watching the film, we identified seven advantages:
Guns, Germs, Steel, Animals, Farming, Writing & Geography.  Using Word Magnets, I created two
scales that the students would have to take into consideration when rating each advantage. 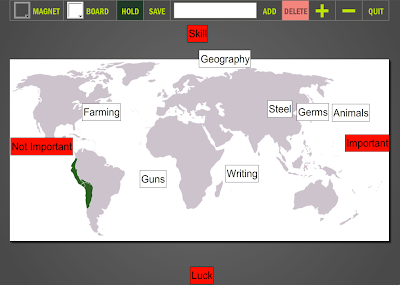 The procedure that I used was to have a student pick an advantage and plot it on the board.  They would then have to address the class and justify their decision and placement.  Another student (and often more than one) could then propose changing the placement of that advantage, and again they would have to justify to the class why they moved the advantage.  Each advantage was moved at least three times, and what I observed was students who typically do not want to, feel comfortable or are willing to contribute to a class conversation, were more than willing to approach the board to move an idea.  Once the class had settled (the best a group of 30 9th graders can agree) on the placement of each advantage I had them turn their chart over and rank the seven advantages from most important to least important, followed up by a writing assignment for homework to justify their ranking.

In my quest to keep technology integration as inexpensive and reasonable as possible, I have to mention that Triptico's application is free to download (thanks to some very impressive work by David) and I have students manipulate the magnets with a wiimote IWB (thanks to some very impressive thinking by Johnny Lee).
Posted by Greg Kulowiec
Email ThisBlogThis!Share to TwitterShare to FacebookShare to Pinterest