I had an energizing experience Tuesday night.  While the deadline was quickly approaching for proposal submissions for this years NCSS Conference in DC, @Ron_Peck, @Beck_Ellis_ and I were putting the finishing touches on a proposal about using video projects to help teach history.  This proposal alone is impressive.  Ron, Becky and I have never actually met.  Last summer as our paths started to cross on twitter, we came up with the concept of a unique chat for social studies teachers on twitter...#sschat was born.  I remember the first few weeks of the chat.  I was working at a basketball camp at Massachusetts Maritime Academy and was refereeing games during the chat.  During free throws, time outs and in between quarters I was pulling out my iPhone to check the stream of conversation and add in a few thoughts.  The first few chats were small, there were about a group of 10 people involved.  Last week, the poll that Becky posted received just under 40 votes, a record high for #sschat.

The term PLN is tossed around and referred to by educators frequently, but beyond reading blog posts, exchanging ideas, assignments and projects on twitter I haven't really experienced a truly powerful moment with my PLN until now.  Back to the NCSS Proposals.

Around 8pm, as Ron, Becky and I were finalizing the video proposal, I mentioned to @Dontworryteach (teaches in DC & another #sschat original member) that our submission was almost finished and we would all hopefully be able to meet in DC next December.

I have to admit, I was exhausted, had no idea that we would actually be able to pull this off.  The deadline was about 3 hours away.  Off I went to New Tokyo to pick up dinner.  By the time I got home Jamie (Dontworryteach) had already started a google document to write the proposal and had invited me to join the process through twitter and email.  By the time I jumped in, she had already put together a fantastic outline and had done the bulk of the work.  Look who was on board editing as well, Ron and Becky!  We furiously edited, discussed ideas in the chat box, re-edited, asked questions and finalized the proposal.  Jamie asked one of her friends @stasikk to jump in to help proof the final draft.  Finally, about three hours later, the proposal was submitted and the feel good tweets started rolling in: 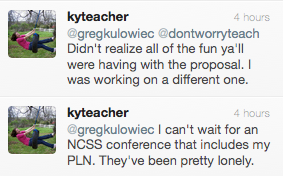 I think what was truly amazing and energizing about this experience is:
1. None of us has ever met face to face.
2. I know Jamie was exhausted, I had no plans to work on this, Ron, Becky and Angela were working on other proposals, @stasikk probably had no idea her help would be requested, yet we plowed through until nearly 11pm to get this proposal submitted.
3. It all came together because of an idea that sprung up last summer, #sschat.
I feel like I finally understand what it means to have and be a part of a PLN.  My colleagues on twitter are an endless source of inspiration, resources, ideas, comic relief and support.  My fingers will be crossed until we all hear back from NCSS!
Posted by Greg Kulowiec
Email ThisBlogThis!Share to TwitterShare to FacebookShare to Pinterest