Edcamp Boston - we planned, they showed up...

The buildup to Edcamp Boston was a combination of both nerves and excitement.  As part of the team of educators that planned the event, I was privy to all of the questions, decisions and discussions that were part of pulling together May 7th.  Like most events, you can't quite predict everything that will happen the day of.  Yet as a result of the hard work of the organizing team, when 8am rolled around Saturday morning, educators began showing up to Mircrosft NERD, Edcamp Boston had begun.

I would like to personally and publicly thank Dan, Karen, Larry, Laura, Liz & Steve for letting me be part of the organizing team & event.  I just read Dan's reflection on Edcamp and I have to echo the same sentiment he expressed in his post.  By the end of planning and organizing and Edcamp the people on the organizing team become more than just people you work with, they become your friends.  Although there was unbelievable learning & sharing at Edcamp Boston, the lasting impact for me are the six new friendships. 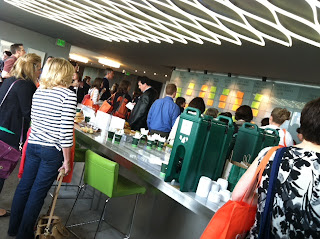 I want to highlight some of the session that I was able to attend and recognize the educators who were so brave enough to spontaneously present and share their ideas.  If you were unable to attend the conference, check out the Posterous Blog that Dan created, where anyone could email links, resources, pictures and thoughts on the day. 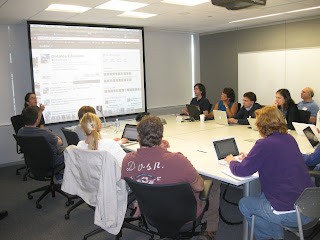 Liz ran an 'Intro to Twitter' session in the morning.  A great choice, as I often forget what it was like to get started using twitter.  It can often feel like an empty abyss.  You see teachers chatting and posting ideas, yet it seems like no one knows you are there.  Here are a few of the resources that were shared in the session.
Cybraryman1's list of Twitter Chats
Twitter4Teachers Wiki
Here are a few more that I have come across that I have found to be helpful for teachers getting started on twitter.
Josh Stumpenhorst's Twitter Tutorial
Josh Stumpenhorst's Twitter Tutorial 102 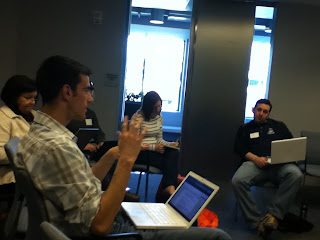 Sean ran a session on Creating an Audience Greater Than One.  Here is the googledoc of notes that was generated during the session.  There was a fabulous discussion around providing an audience for students that extends beyond their classroom.  The issue of Facebook was brought up and it was interesting to hear multiple perspectives on the issue.  Lately I've been leaning towards creating a Facebook page for my World History class next year, but the alternate perspective was brought up quite often, with arguments ranging from the safety and security of the teacher, to exposing our students to multiple platforms beyond Facebook. 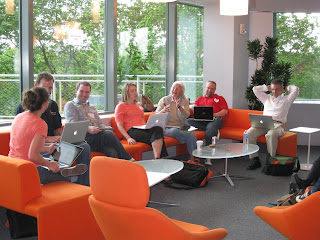 Katrina ran a session on creating self grading rubrics using Google Docs...which can so eloquently be called 'Self Grading Goobrics'.  Like most of Katrina's projects, this is a work in progress (that is a compliment to all of her hard work), and it will undoubtedly progress throughout the summer.  The concept includes a bit of coding (similar to an excel spreadsheet).  The benefit to using the Google docs version is that a copy of the rubric can be made for each student and linked directly into their google docs paper.  As the student progresses through the paper or submits improvements and revisions, the rubric can be revisited and updated to show progress in student writing.

And of course the Smackdown at the end of the day.  I was thrilled to see how many educators stayed for this session.  For a conference that started at 9, had 5 sessions and took place on a Saturday, we had a room full of people ready to share.  Here is the link to the Google Doc created during the Smackdown.

If you weren't able to attend Edcamp Boston, be sure to check out Edcamp Keene on August, 17th and Edcamp CT on August 18th....oh and don't worry, the planning has already begun for Edcamp Boston 2012!
Posted by Greg Kulowiec
Email ThisBlogThis!Share to TwitterShare to FacebookShare to Pinterest