I don't get to participate in twitter chats too often these days.  In a recent layover at O'Hare, I was able to get involved and watch the tweetdeck stream fly by during #1to1techat.  The discussion that evening was facilitated by the world famous Patrick Larkin and the topic of the evening was regarding "what device."

Somewhere along the line I tweeted the following:

This is not to say that the decision isn't an important one to make and that time should not be spent critically evaluating the choices from many perspectives.  But, ultimately I don't think it is the most important question.
A follow up tweet by Amber Teamann prompted this blog post: 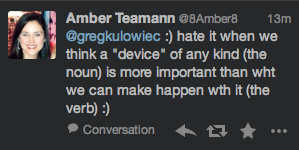 I'll keep this one short and sweet.  As Amber suggests, lets do our best to keep the verbs (what students can do), ahead of the nouns (the device).   Too often, a great deal of mindshare is spent evaluating, discussing, defending and justifying the nouns and precious time is lost that could be spent focusing on the verbs.
Thanks Amber, you get all the credit on this one...