Today was a great class in room 65.  While preparing to write a paper about the responsibility & causes of the American Revolution, I distributed a list of 30 events that had been covered in the unit.  For homework, students explained each event and plotted the event on a chart (seen below).  The next day, using Triptico's "Plot It" and a Wiimote IWB, I had students come to the board, grab the idea and drag it to where they thought it should go on the chart.  Each student had to defend their decision.  The best part of the activity was hearing the reaction of the class as each idea was placed by a classmate.  There were shouts of agreement, frustration and disagreement from the crowd.  The class was packed with discussion and was very fast moving...teaching doesn't get any better than this.

Here is what the final chart ended up looking like.  It doesn't do justice to the interaction the activity created! 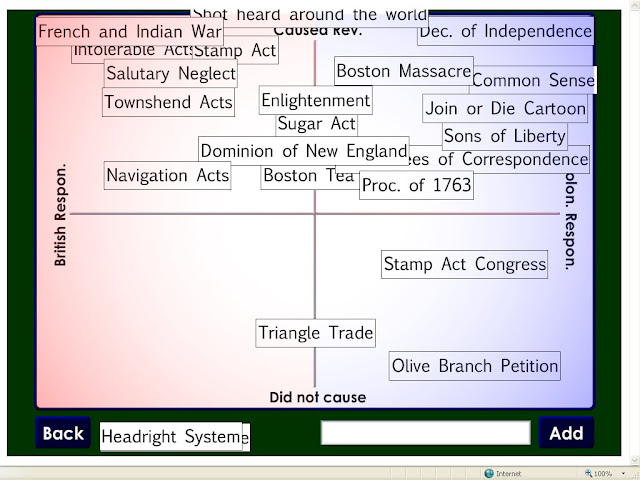 Along the X axis: British Responsibility, Colonists Responsibility
Along the Y axis: Caused Revolution, Did not cause Revolution
Posted by Greg Kulowiec
Email ThisBlogThis!Share to TwitterShare to FacebookShare to Pinterest