I have eagerly been awaiting the release of the ipod touch 4 to be able to begin using QR Codes in my classroom.  Unlike the previous ipod models, the 4th generation has a camera.  The camera allows the touch to scan and decode QR Codes, which in turn call allow students to have access to any web content in the palm of their hand, while sitting at their desks.

Now that I finally have an ipod touch 4 (and hopefully, somehow getting a class set soon), I thought I would explore other uses of the touch.

My first thought was with Poll Everywhere...and the results were exactly what I was hoping for, it works!

Once Poll Everywhere is added to the home screen, the students will have instant access to www.poll4.com (the web response option for Poll Everywhere). 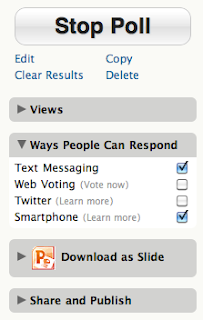 Once students access Poll Everywhere they can vote via the web.

When the new poll is projected in the classroom, students can now vote online with the touch.  This option eliminates the biggest problem that teachers run into when using poll everywhere, cell phone / text messaging in the classroom.  Some classrooms may not have cell reception, schools may not allow cell phone use, or in schools where cell use is allowed for educational purposes, the ipod touch provides an alternative to voting for students who do not have cell or text messaging plans.

The question to the right is the first test poll that I attempted in my classroom using a touch.  The numbers that were automatically generated are: 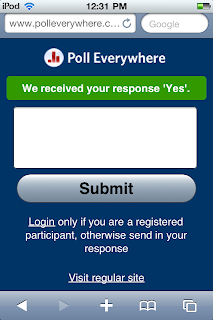 These numbers are then entered into the touch at www.poll4.com.  Once the poll is submitted, the response will immediately appear in the poll results.  Each touch will receive a green 'Yes' confirmation screen when the vote is submitted successfully.

Because students are voting via the web and not from a particular cell phone number, multiple students can vote from one touch.  Therefore, a class set isn't necessary, 5-10 touches for a class could suffice for a class of 30 students.  Students can vote and then pass the touch for the next student vote.

The results below are from 4 votes that were cast from one touch, without changing any settings on Poll Everywhere.  This option would also work with an older model touch and opens up the possibility of having students instantly respond.  Instead of investing in a class set of clickers or response systems, ipod touches can fill the same need and allow for greater web access.