Last year I started using Triptico's resources from their outstanding website.  The two that I (and my students) enjoyed the most were Word Magnets & Plot It.  Unfortunately, when I returned to use Triptico this year, the resources were pulled down because their popularity had grown.  Then, to my surprise, the resources had been packaged into a free downloadable app that could be used offline...even better!

Every resources isn't included in the application, but Word Magnets remains.  With word magnets, I developed an idea to have my students plot their names on an opinion spectrum about historical events or people that we are covering in class.

For example: We recently covered Hernan Cortes and I had students plot their names based on their perspective about Cortes.  On the X axis: Hero & Villain.  On the Y axis: Achieved Goal & Didn't Achieve Goal.  With the Word Magnets Application, I would add in students as they approached the board.  (I had students manipulate the magnet using a homemade Wiimote IWB).  Here is what the final product looks like. 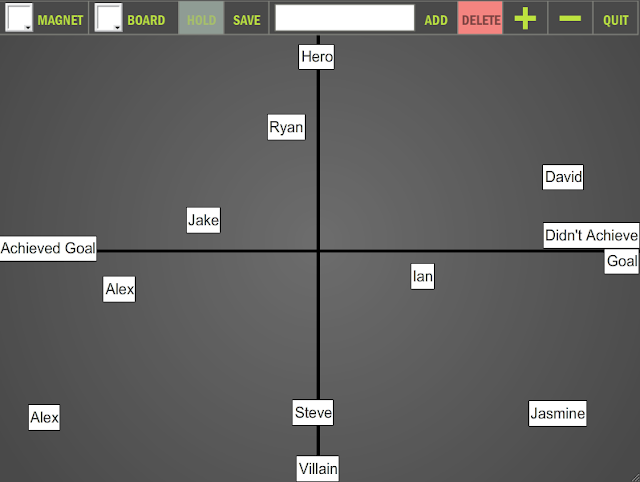 Once the students plot themselves on the grid, the debate begins.  Each student creates the same X and Y axis on a blank sheet of paper and listens as anyone who plotted outside of their quadrant explains their reasoning.  I have the students record arguments from each quadrant.  When the debate and justification is complete I then have students flip the paper over and write one complete argument that defends their position.  An alternative is to have students write about one half of the plot (Hero + Achieved + Didn't Achieve) or (Achieved + Hero + Villain).

To my surprise, at the end of the debate / justification several students asked if they could re-plot their name.  I asked why they wanted to re-plot and they said it was because ______ had some really good points and their opinion has changed!  An unexpected, but fantastic outcome.

Every time I have done this activity the class is engaged, willing to participated and prepared to write about the debate.  The combination of the physical movement of students (approaching the board to plot), the visual (the plot itself) and the required ownership of defending their position leads to an extremely productive activity.

The most difficulty aspect of this activity is developing terms for both the X and Y axis that will lead to debate and that will result in varied responses by a class of students.  Also, if you don't have an IWB or Wiimote IWB, a wireless mouse that can be passed around the classroom works great.

Any comments or new Plotting History ideas would be more than welcome!
Posted by Greg Kulowiec
Email ThisBlogThis!Share to TwitterShare to FacebookShare to Pinterest