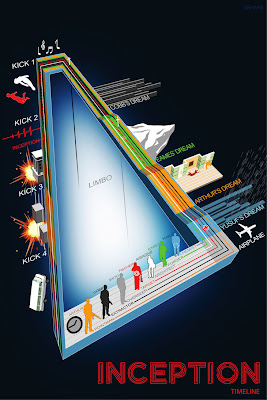 Inception...I've been meaning to watch this since I saw the previews and I was finally able to sit down and watch the film.  Besides doing my best to follow the story, the levels of dreams, the attempt to plant an idea in Fischer and the unreal cinematography, I was particularly struck by a conversation about midway through the film.  Cobb's team was sitting around discussing the possibility of planting an idea (inception) into their target's subconscious through his dreams.  Two points stood out from this discussion that made me immediately think of teaching and education.  Cobb suggests that for an idea to stick, to grow and to be truly accepted by the target it must be emotional, positive and simple.  Cobb's team is attempting to get Fischer to consciously decide to break up his dying father's company, thus allowing Saito to take over the energy industry.  They quickly realize that if they plant a completely developed idea: Destroy your father's company, it will be rejected by Fischer's subconscious and will never manifest in reality.  Someone suggest a negative idea, that Fischer hates his father.  Cobb points out that a positive idea has a greater chance of sticking than a negative idea.  They quickly reframe the negative idea into a positive one and simplify the idea.  The idea has to be so simple and positive that it can grow naturally in the subject, and then it will eventually turn into the finished idea.

For inception to work, an idea must be:
1. Emotional
2. Positive
3. Simple

If an idea is too well thought, if it is negative and lacks emotion it will be rejected by the subject...

Call me strange, but this conversation struck a cord with me, especially when I think about traditional (required) professional development sessions I have attended. 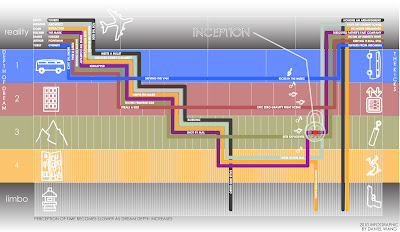 We have all been there before, a professional development day (or half day) where the presentation seems like a poorly executed attempt at changing or improving our day to day classroom instruction.  The ideas are explicit & detailed.  They include statistics, handouts & rubrics.  I'm not suggesting that a well planned presentation that includes stats, handouts and rubrics is a waste of time.  But what I do know, is that from my experience traditional professional development isn't emotional, positive and simple.  Just as Cobb's team in Inception realized that if they plant an idea that is too well developed, negative and unemotional, it will be rejected by the subject, I think that PD sessions that feed a completely developed finished product (too complex), that provide little time to interact with other educators (unemotional) and focus on what is wrong (negative), will be rejected by educators.

I can only speak from my personal experience, and what I have found is that self driven, user created professional development fits into the framework outlined in Inception.  If we want change, truly want change, could it be that the ideas that we share with other educators should be much simpler?  Instead of taking someone step by step through an entire process, leaving them with a completed, complex and unemotional idea, should we do the exact opposite?  Like it was suggested in Inception, do ideas that truly stick and become part of someone start is simple, positive & emotional experiences?

Why did I go to EduBloggercon East last summer?  Why am I getting involved in and going to EdCamp Boston in May? Why do I participate in #sschat on Monday nights?  Because the environment is exceptionally positive, the format is extremely simple and the experience is emotional.

I left EduBloggercon East with a positive emotional experience.  I invited a teacher in my department to travel to Boston with me, to experience the day.  We took the train home energized and excited about who we met, what we talked about and where we could go with the new ideas we had been exposed to. But, the ideas weren't complete, they were just the beginning of an idea.  They were ideas that still had to grow and mature.  In other words, we walked away with idea that would become ours.  I remember the ideas shared at in these settings because they were shared in a positive environment, an environment where people were there by choice, not by force or expectation.

I want my PD to be emotional, I want my PD to be positive and I want my PD to be simple.  User generated PD fulfills all of these Inception requirements.  User generated PD is emotional because it is inspiring.  Whether it be a conference (EdCamp) a less formal get together or a discussion on twitter, everyone is there by choice and the ideas are shared in a positive environment.  If the goal is to create change in education, could it be that the three rules outlined in Inception can get it done?  Can traditional (required) PD be simple, emotional and positive?
Posted by Greg Kulowiec
Email ThisBlogThis!Share to TwitterShare to FacebookShare to Pinterest