Every year when I cover the Industrial Revolution with my 9th graders, I go into some depth with understanding Karl Marx & Communism.  To introduce the topic, we play the 'Rock, Paper, Scissors Karl Marx Game' and then we begin examining ideas from The Communist Manifesto.

We begin by examining four quotes from Karl Marx to understand the concept of alienation & exploitation, that occurs (according to Marx) by working in an industrialized society.  We then move read directly from The Communist Manifesto.  This excerpt, focuses on the beginnings of class oppression.  In addition to both excerpts, students participate in various writing assignments to demonstrate their understanding of the readings.
One of my favorites to use is a 'quick write' challenge.  After reading and discussing the documents, everyone in the class writes for two minutes.  The purpose is to get the students to 'get out' or 'dump' every idea they can think of onto the paper as quickly as possible.  I then have students count the number of words on the paper & I have students read their 2 minute responses.  After a number of students have read, we do the 2 minute challenge again, but increase the time to 4 minutes.  Based on the ideas shared by the group, the new goal is to more than double the word count.
Finally...the purpose of the this post:
Students have played the game & have been exposed to, analyzed & have written about the concepts proposed by Marx. But, I still want to make sure they truly understand communism, and more specifically the differences, advantages and disadvantages as compared to capitalism.  I have never quite found a method that I like that connects with the students and allows them to debate, challenge their perspective and demonstrate their understanding...that is, until I came across this NPR podcast: Steve Nash, Basketball's Selfless Socialist?
When students arrived to class the next day they were greeted with a question on the board:
What style of play is best for an athletic team, to play like capitalists or communists?
At first students were confused, they looked at capitalism and communism as economic principles, theories or systems, not as a way of thinking or behaving.  Then, they began to write, and write, and write.  Then we began to debate the merits of each way of playing.  What was surprising, was that the students came up with ideas and perspectives that I hadn't considered when designing the activity.
Here are a few examples:
- they argued from a player's perspective
- from a coach's perspective
- from a fan's perspective
- from a T.V. executive's perspective (this one surprised me)
- Real life examples: Miami Head (capitalist) & Boston Celtics (communist)
- History: Chicago Bulls - were they capitalist or communist?
One student asked if he could draw a picture to demonstrate his understanding: 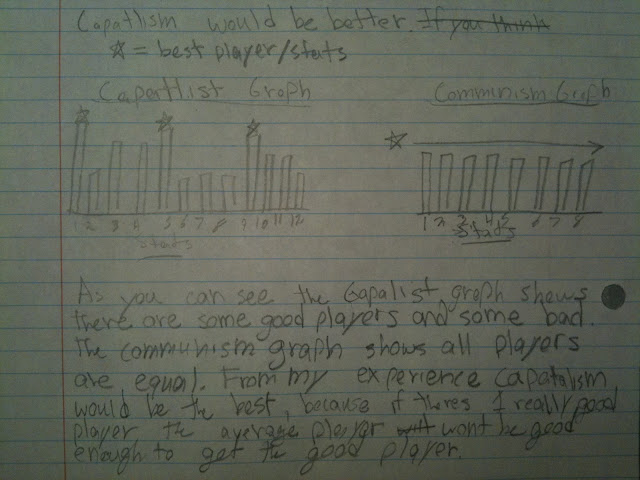 Once the debate was finished, we listened to the NPR story about Steve Nash.  I had students take notes during the story & then do a follow up written response.  We then concluded class with closing remarks from students.
Every once in a while as an educator we create classroom activities that connect with students.  Activities that take ideas from our curriculum and place them in a context that is real to students.  A context that allows them to completely understand a complex idea, connect it to their prior knowledge and experience.  This was one of those times.
Please use the materials provided and let me know how it goes in your classroom.
Posted by Greg Kulowiec
Email ThisBlogThis!Share to TwitterShare to FacebookShare to Pinterest