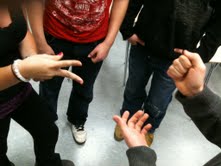 We are currently examining the Industrial Revolution.  As part of the unit we examine the teachings of Karl Marx, learn about the stages of history, exploitation and a world wide worker revolution.  Before we get into any Karl Marx, my students play the Rock, Paper, Scissors - Industrial Revolution simulation.  The game is simple.  Everyone starts with two paper clips, people challenge each other (rock, paper, scissors) to win paper clips.  If you lose all of your paper clips, you become a worker for the person that you lost to.  You can gain your independence if you earn two victories for your boss.  However, once your independence is achieved, you are right back in society with one paper clip and only one loss away from becoming a worker again.  The purpose of the simulation is to get students to understand Marx's theory of exploitation of the working class.  Usually towards the end of the simulation, I will announce that I don't appreciate the level of exploitation that is taking place that I then redistribute the wealth evenly amongst the class.

Is the classroom loud, absolutely.
Is there energy in the room, to much to describe.
Is everyone participating, yup. 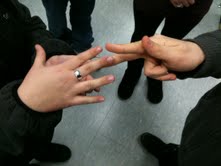 Are they engaging in a physical activity that will allow them to remember and connect an academic idea, that is the goal.

As the game plays out, I stop it about halfway through and create a list on the board of owners & their workers. Later in the game, I stop it again and modify the list to show the changes that have taken place in our 'society.' (the results are below)

What I like the most about this activity is displayed in the Round 1.2 image above.  I never discussed corporation, mergers and joining forces...and look what happens.  The three 'Owners' that exist later in the game are all corporations that have joined forces to increase their capital and workforce.  It is revealing and interesting to listen to their negotiations about who owns the corporation, who has power and who are the workers.

The simulation can be played in 15 minutes, or you can let it play out for an entire period.
I follow up this activity by having students examine excerpts from Karl Marx's writings.  They theory that they are exposed to in the readings is easily connected to the experience they went through while playing the game.